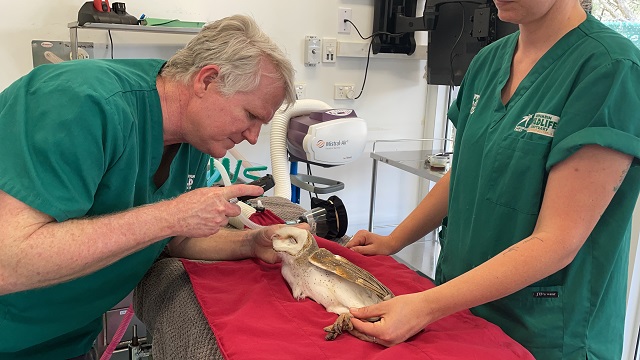 The subadult owls were admitted to the Hospital after being attacked by other birds like noisy minors, magpies, and butcher birds.

Owls are attacked more frequently as the weather warms, as breeding season for the smaller birds begins and they become aggressive. The young barn owls are not experienced at hiding from these other aggressive breeding birds, which leads to increased attacks.

So far in 2021, 95 owls have been admitted for treatment, with 40 of those admissions in October alone. It’s a huge increase from 2020, when just seven barn owls were admitted to Currumbin Wildlife Hospital.

Due to the mouse plague that occurred across New South Wales this year, even more owls could be brought into Currumbin Wildlife Hospital in the coming months.

What can you do to help?

If you see an owl or any bird in the wild that you think might need help, call Currumbin Wildlife Hospital on 5534 0813 for advice before picking it up. The bird’s behaviours and appearance will indicate if it needs to be brought in for veterinary care.