A Train Ride Down Memory Lane

The Story Behind A Wildlife Sanctuary’s Much-Loved Mini Locomotives 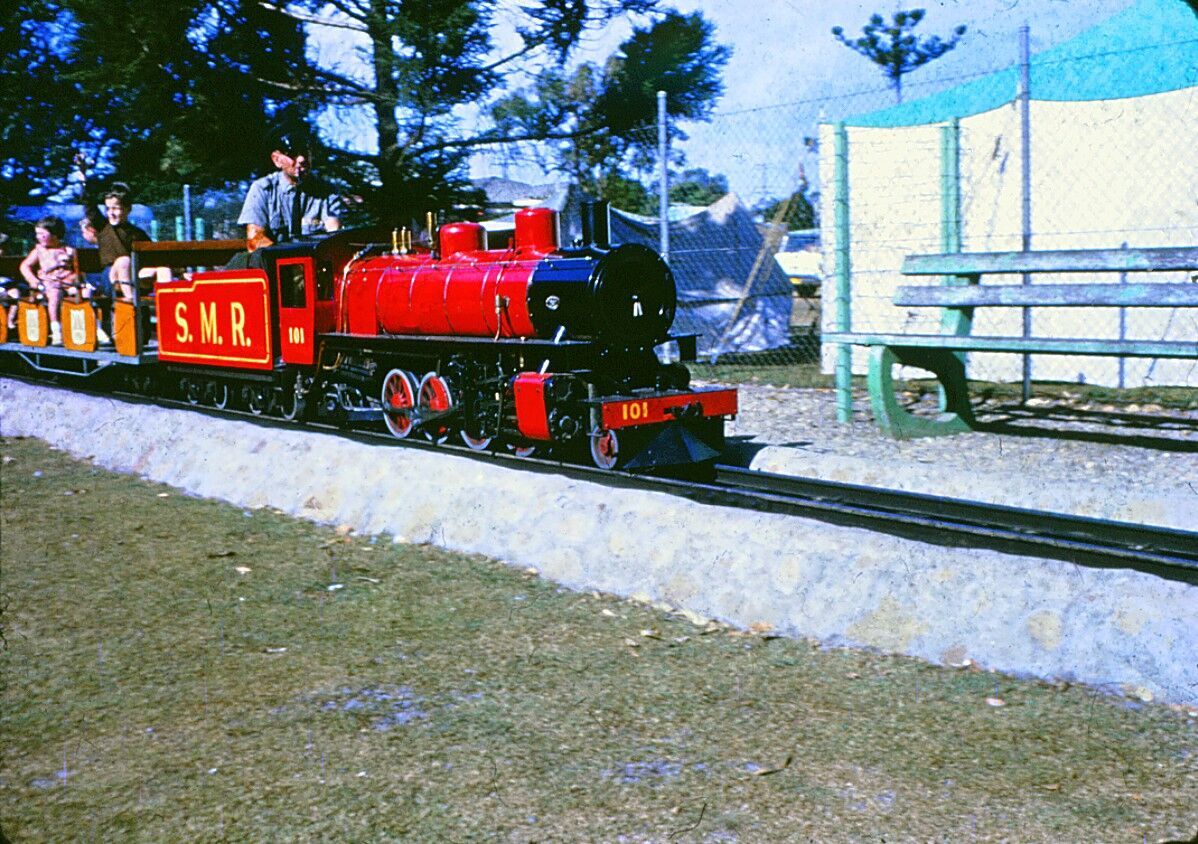 For generations, the Gold Coast’s famed miniature railway has meandered its way through the heritage-listed zoological garden, that is, Currumbin Wildlife Sanctuary. Nestled in the heart of the city’s coastal eucalyptus and rainforest are four shiny red, blue and green trains so loved by the local and international community, they’ve made their way onto the Queensland heritage register. The trains (calling at stops across from the park’s entrance, Green Patch, Kangaroo Crossing and Wild Island) were designed to keep visitors from missing out on all the action and the Sanctuary’s stunning surroundings.

But what makes this pint-sized locomotive so loved by the local community and overseas travellers? Let’s take a train trip down memory lane:

The train was built in Brisbane by engineer James Jackson.

It was the year that marked the beginning of the Sanctuary’s miniature railway system – and for founder Alex Griffiths, it was a significant year all-round in terms of the park’s expansion. But with the project underway, Alex knew he had to keep the original spirit of the Sanctuary (including his bird-feeding spectacles) alive. And so, he sought a solution that would ensure his mjmguests could continue to enjoy the original side of the Sanctuary and wildlife reserve. In 1964, Alex requested the construction of a steam train and long winding track to navigate what was then known as the ‘Currumbin Bird Sanctuary’ in all its picturesque entirety.

The track is extended to travel under the new Currumbin Creek Bridge. 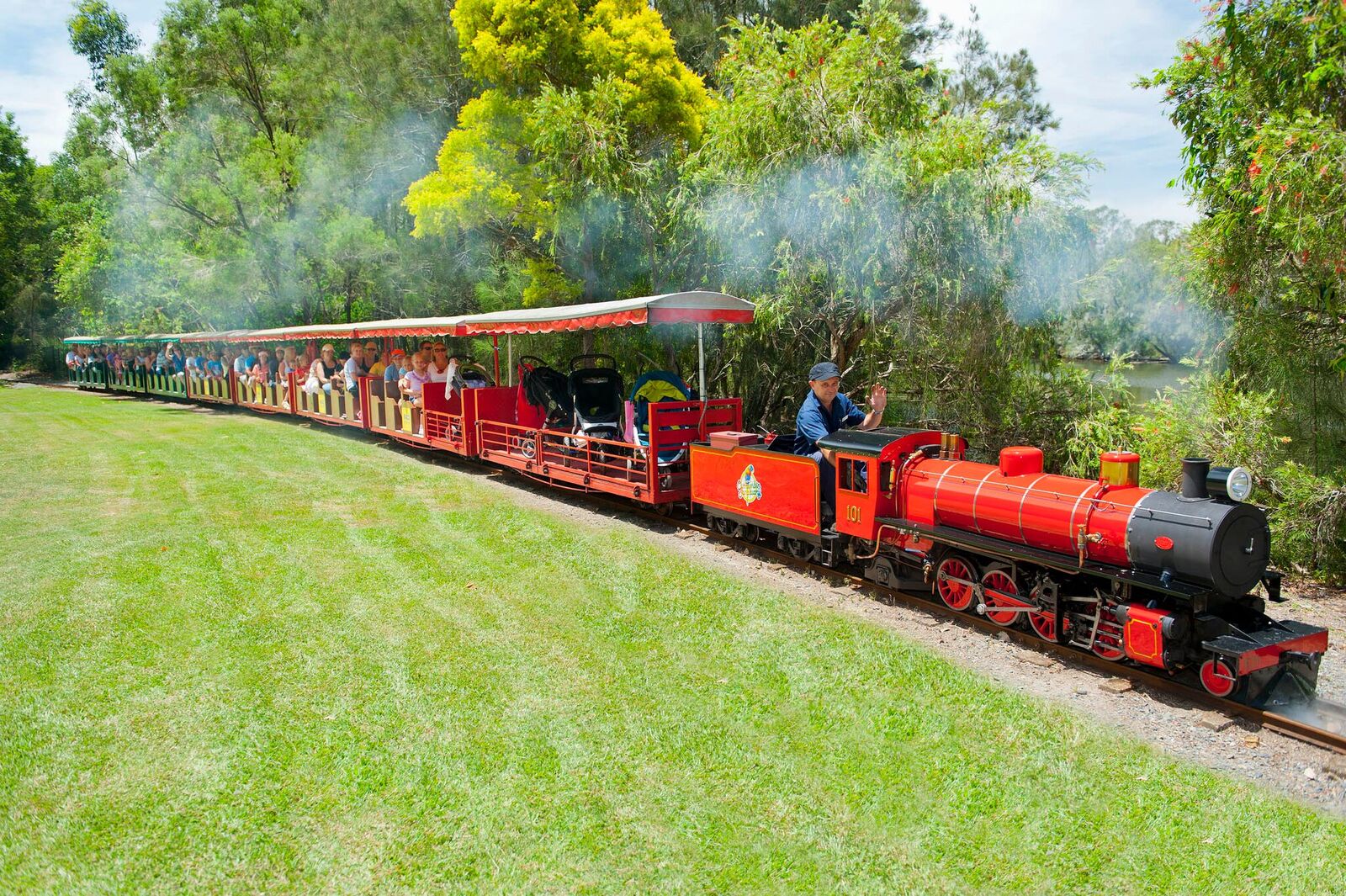 It wasn’t long before the Sanctuary train began picking up steam – and after a decade of the Currumbin Bird Sanctuary, the track was extended to comfortably escort guests on a scenic journey throughout the even larger expanse of sanctuary land.

A shiny new locomotive came along for the ride, which was the first of what would later become a set of three diesel trains. A replica of the Commonwealth Railways train known as GM1 – the Red Train hauled an extra eight carriages in order to cater for the park’s growing number of enthusiastic patrons.

After more than two decades of amusing 20-minute round trips to explore Alex’s beautiful Currumbin property – a third, blue train was added to the collection. The replica of a Queensland coal and shunting train known as DH44 came at a time where tourism, especially on the Gold Coast, was thriving. 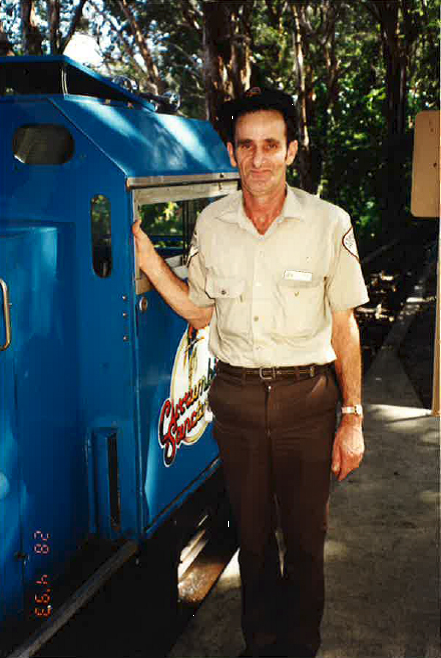 This year marked the beginning of an era. An era of very special individual who brought smiles to the faces of thousands of children, parents and overseas visitors. When Cec Thompson took up his train-driving post at Currumbin Wildlife Sanctuary, he would later become one of the park’s longest serving employees.

Almost as well-known as the train he captained, Cec drew great pleasure from the company of his passengers, whilst fostering his passion for locomotives. Over the next 20 years, Cec would clock up 436,800 kilometres in Sanctuary train journeys – a combined distance so great it would surpass that between the Earth and the Moon. For another way to put it, Cec drove his train around the world 10 times.

A fourth and final green train finds its way onto the tracks. 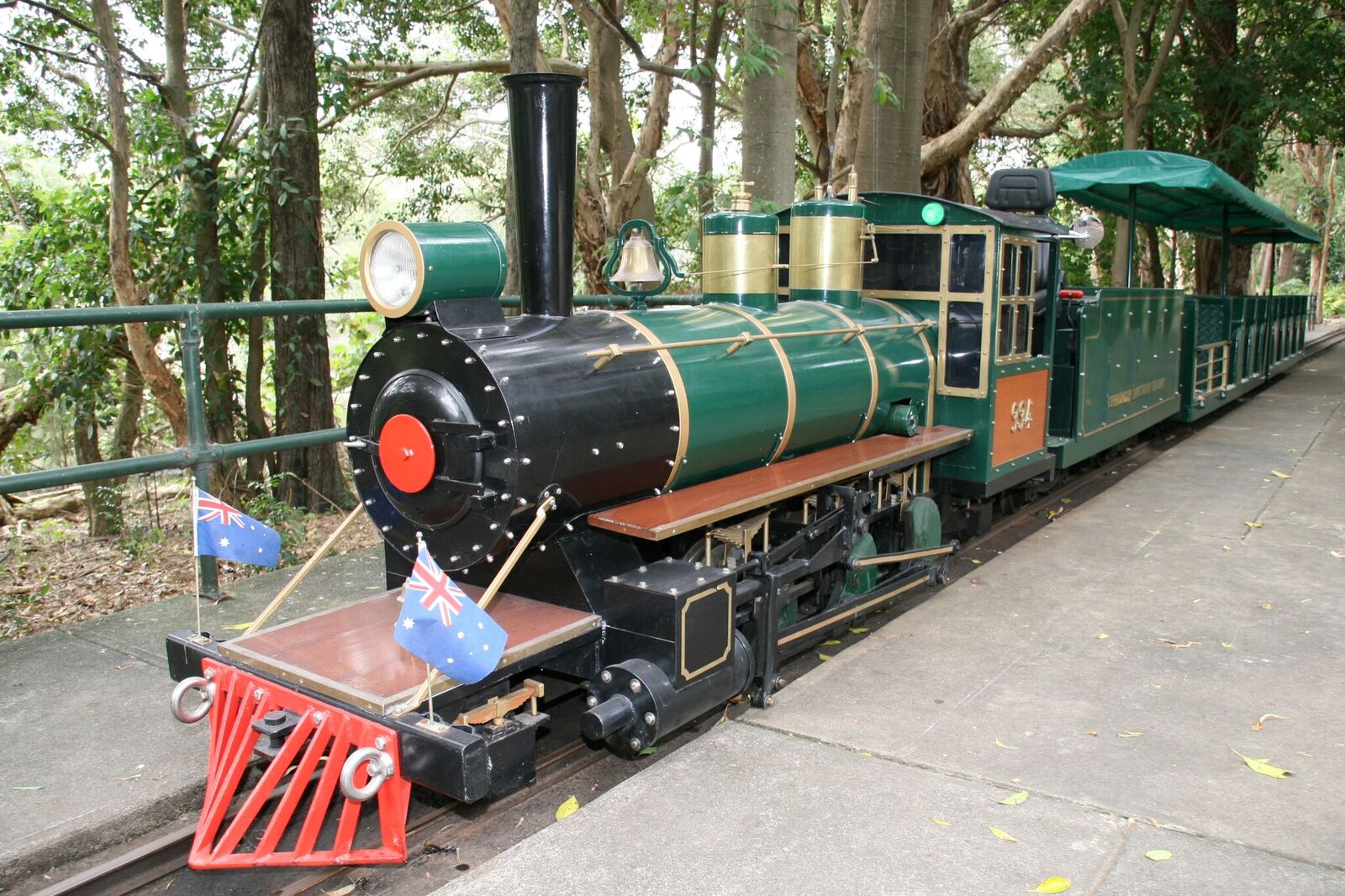 To join the team of primary-coloured trains was 1994’s Green Train – a smaller scale model of steam train No. 24 from America’s Sandy River Railway – designed to meet the demands of a flourishing park.

The original Steam Train relaunches after a two-year lapse.

Choo choo! In light of the centenary celebrations that were being held in memory of founder Alex Griffiths, the original Steam Train resumed its post to carry guests on an expedition through time. The train’s triumphant return brought a whole lot of joy to the faces of local children and veteran patrons alike – and of course, the Sanctuary's time-honored driver Cec was at the helm of its grand and long-awaited return. 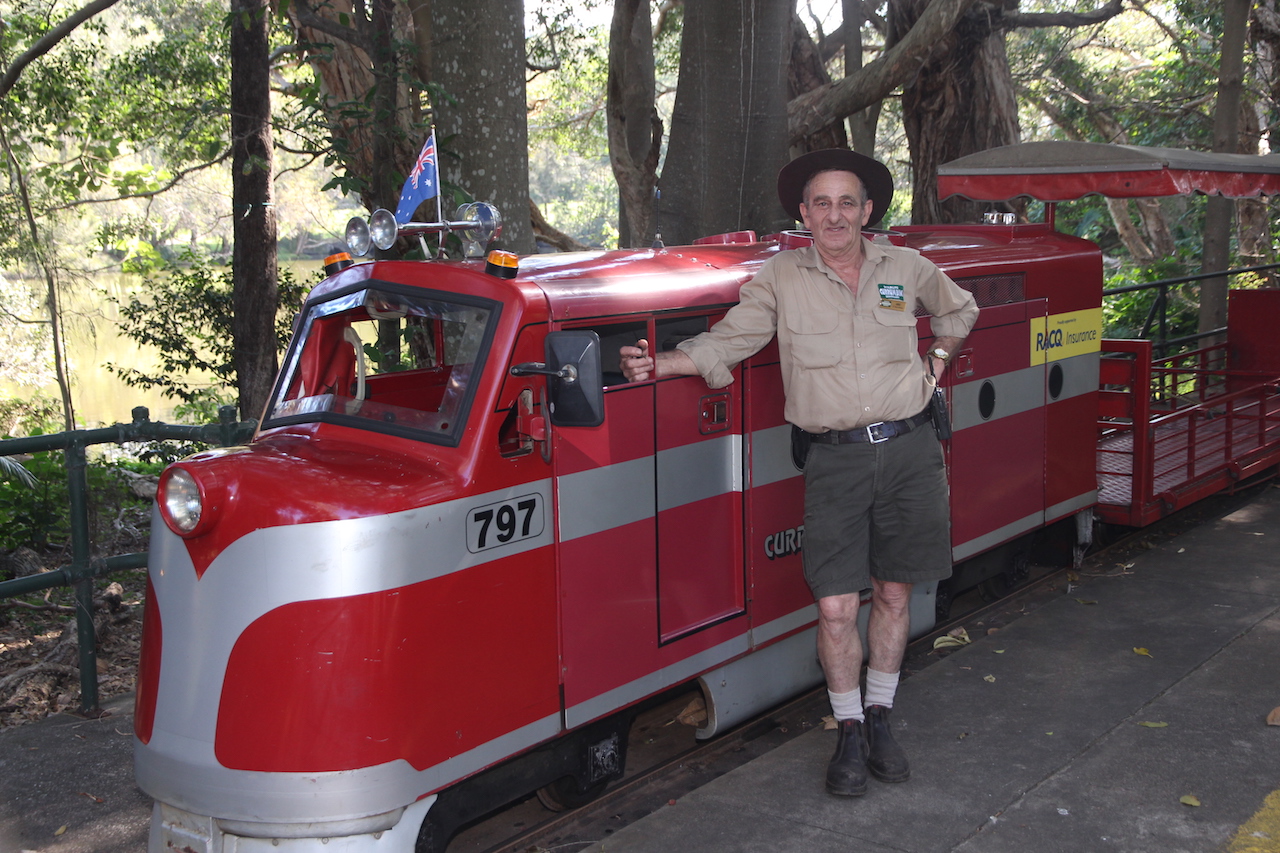 It was an emotionally-charged year for Currumbin Wildlife Sanctuary, as staff and patrons wistfully bid farewell to their long-serving friend and local hero. Cec Thompson decided to call it a day after more than two decades of whizzing past birds, kangaroos and koalas. In 2014, he passed the baton to the younger employees he had been mentoring in the lead up to his departure – indeed, they had some big shoes to fill.

Cec played an enormous part in shaping the railway into one of the most popular attractions at the Sanctuary – a feat that stands just as true today as it did then.

The locomotive legacy of Alex Griffiths lives on. 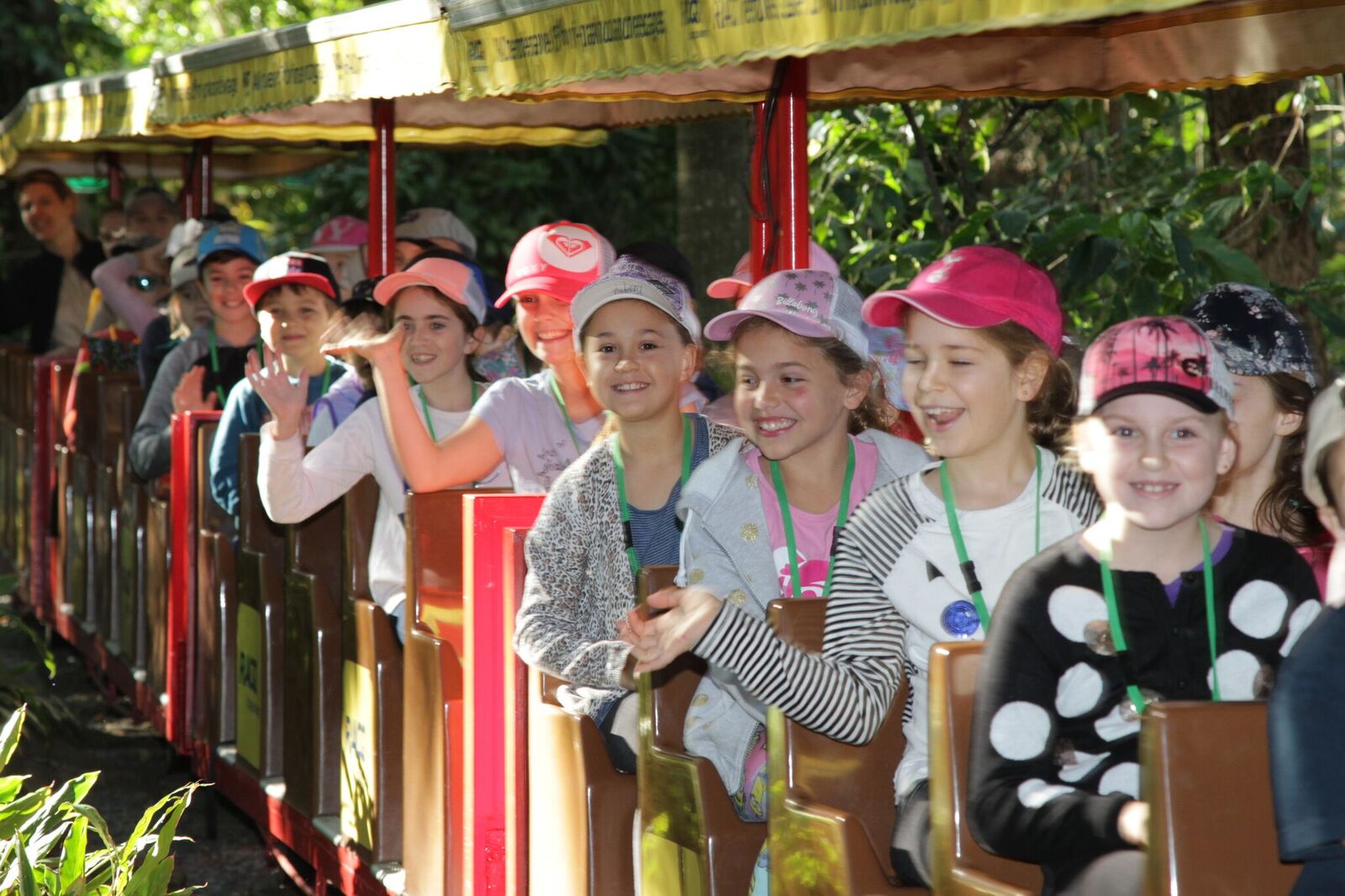 In 2018, this coal fired steam train continues to make its way through the Sanctuary grounds – much to the delight of locals and overseas visitors alike. In fact, all four trains still operate at different times throughout the year at Currumbin Wildlife Sanctuary.