Awwwww! It’s a… puggle! Here at Currumbin Wildlife Sanctuary, we love sharing the heart-warming news with you when a new bundle of joy joins our family. And we’re so excited to announce that we’ve welcomed a gorgeous puggle to our growing brood!

For those who are wondering what exactly a puggle is (and no, we’re not referring to the canine kind), we’re here to give you the low down on this tiny, oh-so-adorable Aussie creature that’s captured our hearts… and will most certainly steal yours, too! 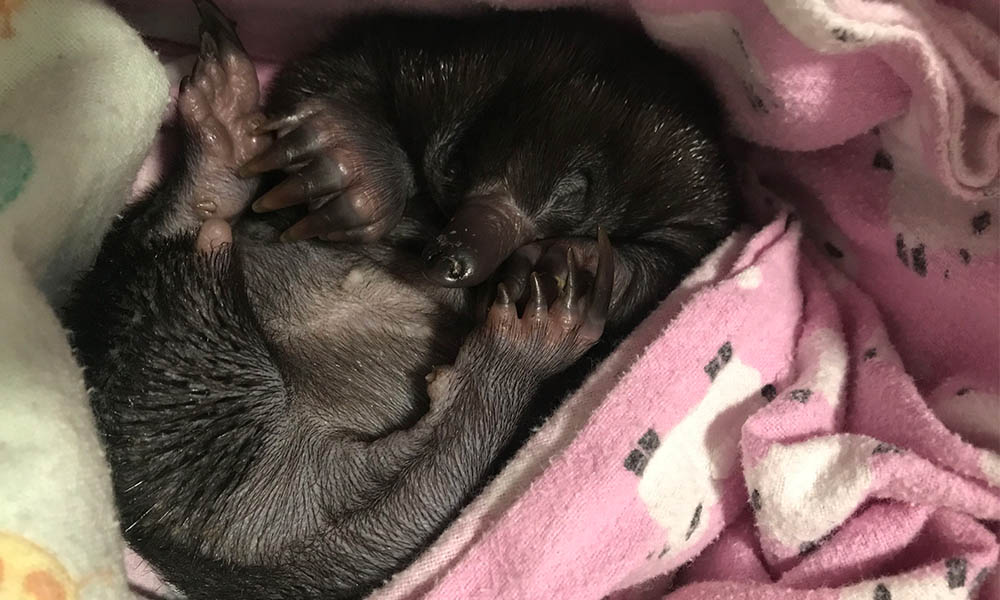 Born in August of last year, Pooh Bear is the offspring of parents Coffsgirl and Brown Bear, and sibling to Baloo (there’s a definite bear theme going on here!).

Believe it or not, Pooh’s gender remains a mystery and the wildlife team here at Currumbin Wildlife Sanctuary won’t be able to identify whether Pooh is a boy or a girl until about two years old – when its organs develop further.

Gorgeous Pooh was born right here at the Sanctuary, and – unable to be cared for adequately by mum after leaving the pouch – has since been hand-raised by our wildlife keepers Lauren and Alice, who have done a tremendous job of rearing this adorable infant.

Pooh has enjoyed being fed Wombaroo Echidna Milk – a special milk supplement – every four days from the palm of the handlers, and just like a child of a similar age, the team are now starting to introduce solids into Pooh’s diet.

And when it comes to what’s on the menu, these little guys aren’t big on variety… in fact, they’re pretty happy to dine on the same cuisine for breakfast, lunch and dinner. Any guesses as to what it is that echidnas love to eat?

Live termites! Yep, while these critters might be nothing more than a household pest to us humans, this is the fare of choice for our echidnas. Without any teeth, they use their long, sticky tongues to slurp up their favourite feast of insects (ants and worms have also been known to get a look in every now and then, too!).

Pooh has already grown incredibly fast, drinking up to 20% of its bodyweight in each meal sitting. But while Pooh’s parents, siblings and echidna friends at the Sanctuary (we have over 20 who call Currumbin home) are all covered in strong, sharp two-inch spines, Pooh’s spines are still developing, and boasts a cute covering of fur on its tummy and back, along with a leathery snout.

Don’t let their tough exterior trick you into thinking these Aussie icons are unfriendly. Shy in nature, and a little elusive, echidnas actually have quite the personality – and love meeting new faces and friends at Cururmbin Wildlife Sanctuary as part of daily Echidna Encounters.

At the tender age of seven months, Pooh is already showing an incredible zest for life, and is starting to explore and soak up its new surrounds, with regular (albeit slow!) walks around the echidna enclosure.