5 Endangered Australian Species You May Never Have Heard Of

Including our conservation projects at Currumbin Wildlife Sanctuary

Australia has lost more animals to extinction than any other country in the world. With so many of our lesser-known native animals hanging on the very cusp of existence, now’s the time to act.

Echoing the wise words of this famed conservationist, protecting our wildlife for future generations is important to us—and we understand that education is the key to success in conservation. Our breeding and research projects have been an effective conservation tool, helping us to impart our knowledge of the major threats which face our most vulnerable species, many of which are flying under the public radar.

Here are just a few of the causes we, at Currumbin Wildlife Sanctuary, are actively pursuing:

No, not Kermit the Frog. The Kroombit Tinker Frog is a critically endangered Queensland native who’d be a whole lot harder to spot in the rainforest than the bright green Muppet-type. This rather unknown amphibian gets its name from the high-pitched “tink, tink, tink” sound it makes in the summertime, when it’s ready to mate.

Although the risk of extinction for this tiny little frog is high, research suggests this can still be undone.1 The Sanctuary's world-first conservation efforts hope to safeguard their future for generations to come, and scientists are working on ways to protect them from the deadly chytrid fungus.

While you’ve probably heard of our native Brush-Tailed Rock-Wallaby, this near threatened species were considered pests and were in fact hunted for their skins. The very agile Brush-tailed Rock-wallaby, moves confidently around their rocky habitat using their and padded feet for grip and long, thickly furred tail for balance. Due to clearing of native vegetation and exotic plant invasion and altered fire regimes,  making their habitat fragmented and scarce. Other causes of morality include predators and hunting.

We will continue to follow breeding recommendations for the management of this species.

While the Eastern Bristlebird is known for being shy, its loud and distinctive call can actually make for a unique and reliable way to track them down.3 But traditional birdwatchers will have a lot of trouble spotting this little known whiskered songbird in the wild—and numbers of Bristlebirds are dwindling fast, making it even more difficult to observe any of its estimated population of 35.

Back in 2013, we partnered up with the New South Wales Office of Environment and Heritage to breed captive populations for release—and in 2018, we’re still refining our captive husbandry approaches to give these birds the best chance of success in the wild. The Eastern Bristlebird is currently listed as an endangered species. 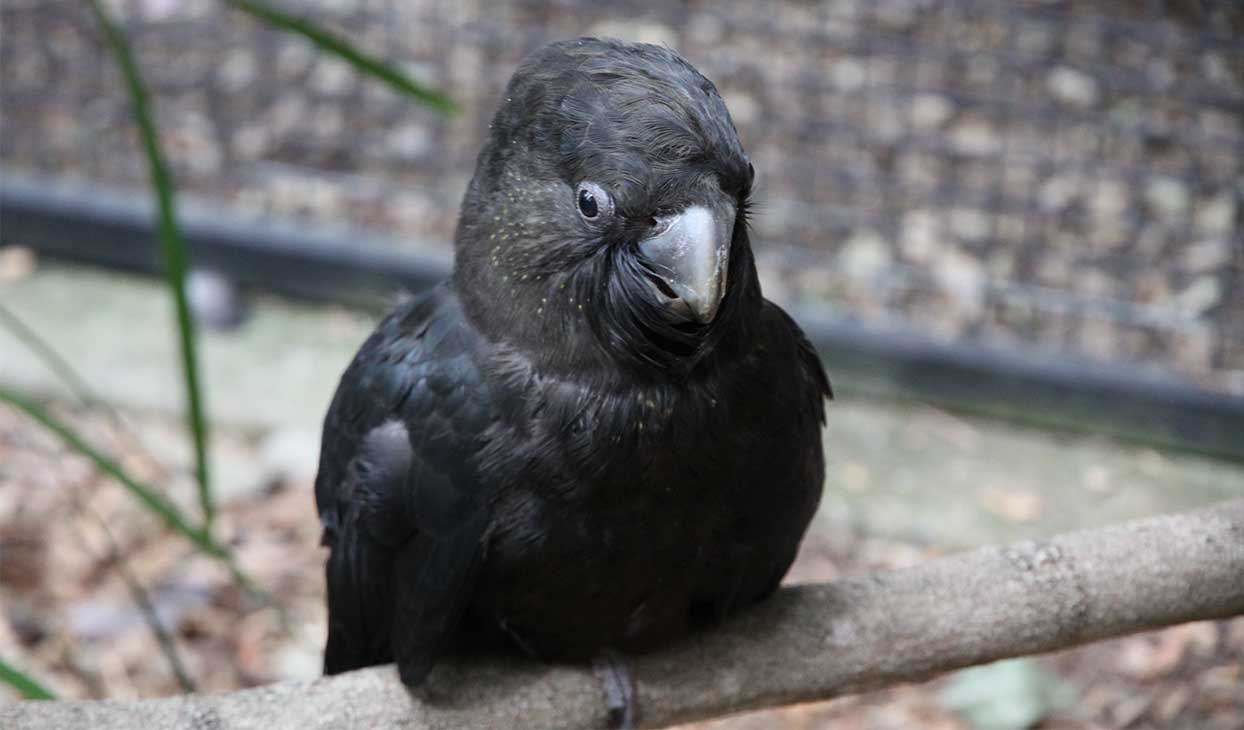 While the appearance of their chicks might be a little on the eccentric side, when matured, these feathered friends boast a shiny black-brown plumage with brilliant red tail panels. Listed as vulnerable, glossy black-cockatoos face an uncertain fate—and, if education, community support and breeding programs are unsuccessful, they could disappear from Queensland skies altogether.

Much to the excitement of our Sanctuary, our conservationists have managed to pull off a captive breeding program for these friendly birds. Feeding almost exclusively on the seeds of Allocasuarina and Casuarina—this was no mean feat for our wildlife heroes.4

For over two decades, our Sanctuary has been involved in recovery efforts for the Macleay’s Fig-parrot in the hopes that the same breeding and husbandry conventions can be put in place if and when its endangered rainforest relative, known as Coxen’s Fig-Parrot, returns to captivity.

These brightly-hued natives are among the country’s most endangered birds.5 Our aim is to increase community awareness of the plight of the little-known Coxen’s Fig-parrot, before the species edges closer to extinction.

Our commitment to wildlife conservation is the very bedrock of our organisation—and our conservation efforts wouldn’t be possible without our dedicated staff and volunteers, as well as the generous support of our visitors. To improve the prospects of Australia’s critically endangered wildlife, you can visit or donate to the Currumbin Wildlife Hospital—or discover more on your next visit to the Sanctuary.

4. Tisdell, C. and Wilson, C., 2004. Birds in an Australian rainforest: Their attraction for visitors and visitors' ecological impacts.